The code below is an example of creating a container using Containerd. First, connect to Containerd using the UNIX domain socket containerd.sock. Containerd is a daemon process that always runs in the background. After that, through the Client object, Containerd gets the latest Debian Linux image and creates a Debian container. Very intuitive and simple, isn’t it? What you can see here is that it communicates with the process through the Client object. Although it cannot be confirmed in this short code, the communication process between Client and Container is summarized in this post.

Delegates on the client side Client ¶#

Put basic information about the newly created container in containers.Container. This structure, defined in containers.go, includes several fields, but since it is before the container is created, it only contains information necessary for creation, i.e., what ID to identify a new container with, and what runtime to create. Here, runtime means things such as runc or gVisor, and the explanation can be found in the previous part. Anyway, if you pass this structure to the ContainerService().Create() method, a container is created.

The NewContainer() method is contained in the client.go file. The receiver of this method is a Client object. That is, a container can be created only when a Client object is created from the standpoint of embedding Containerd. to pkg.go.dev/github.com/containerd/containerd Some of the listed APIs are methods of this Client object, and methods with intuitive names such as GetImage() and LoadContainer() are included. I thought these APIs were from Containerd, which I had to call via gRPC, but they were actually from the Client. To put it simply, the Client is the client’s proxy and establishes a connection with Containerd using gRPC on behalf of the client. Therefore, the developer who implements the client does not need to worry about complex contents such as gRPC.

Is RemoteContainerService just a shell? ¶#

Contents related to remoteContainerStore are in containerstore.go, and you can see in comments that there is an actual containerStore beyond gRPC. There are methods such as Get(), List(), Create(), Update(), and Delete() in this file. As you can guess from the name, creation/deletion of containers, and acquisition/update of previously created container information carry out However, the actual work is only performed by containerStore of Containerd. It’s just a shell.

The create() method in the code below is a method of the ContainersServer object, which is a server-side object beyond gRPC. So how does gRPC map the create() method of ContainersClient, which is a client-side object, to here? The answer is the RegisterContainersServer() function. The developer of Containerd should implement the ContainersServer type object defined by gRPC and pass it as an argument. As a result, this function maps the method of the object developed by the developer to be called. Since gRPC is in charge of mapping related content, I will not explain it in this post because it is annoying. Anyway, this code is contained in a file called service.go, and the file implements a plug-in called “containers”. Details related to this will be described in the next paragraph.

The Create() method of the ContainersServer object that we looked at earlier seems to be able to create a container directly, but the Create() function of the local object is offloading the work. Why? Now, I would like to explain the unique part of Containerd. Remember that the above code is implemented in a file called service.go and the code below is implemented in a file called local.go. Let’s take a look at the following four things first.

In summary, the server object, the shell for gRPC, is contained in the service.go file, which implements the container plugin. On the other hand, the local object is contained in local.go, which is the body that actually works, such as creating an actual container, and implements the ContainersService plugin. This ContainersService plugin is identical to the one we saw in the architecture photo earlier. The container plug-in is simply a pass-through in charge of gRPC for ContainersService, so it doesn’t seem to appear in the picture. no need to come out

One more thing, the local object is implemented by dragging the ContainersClient type created by gRPC. Strictly speaking, the local object is located at the server-side end of gRPC. I don’t understand logically why ContainersServer was not dragged. Perhaps the server object is already using the ContainersServer type, so it is implemented like this to avoid confusion, but I feel the implementation is more confusing now. Anyway, it’s not important, but if you know the reason, please don’t pass it by and leave a comment.

The communication process between the client and Containerd described so far is illustrated as follows. 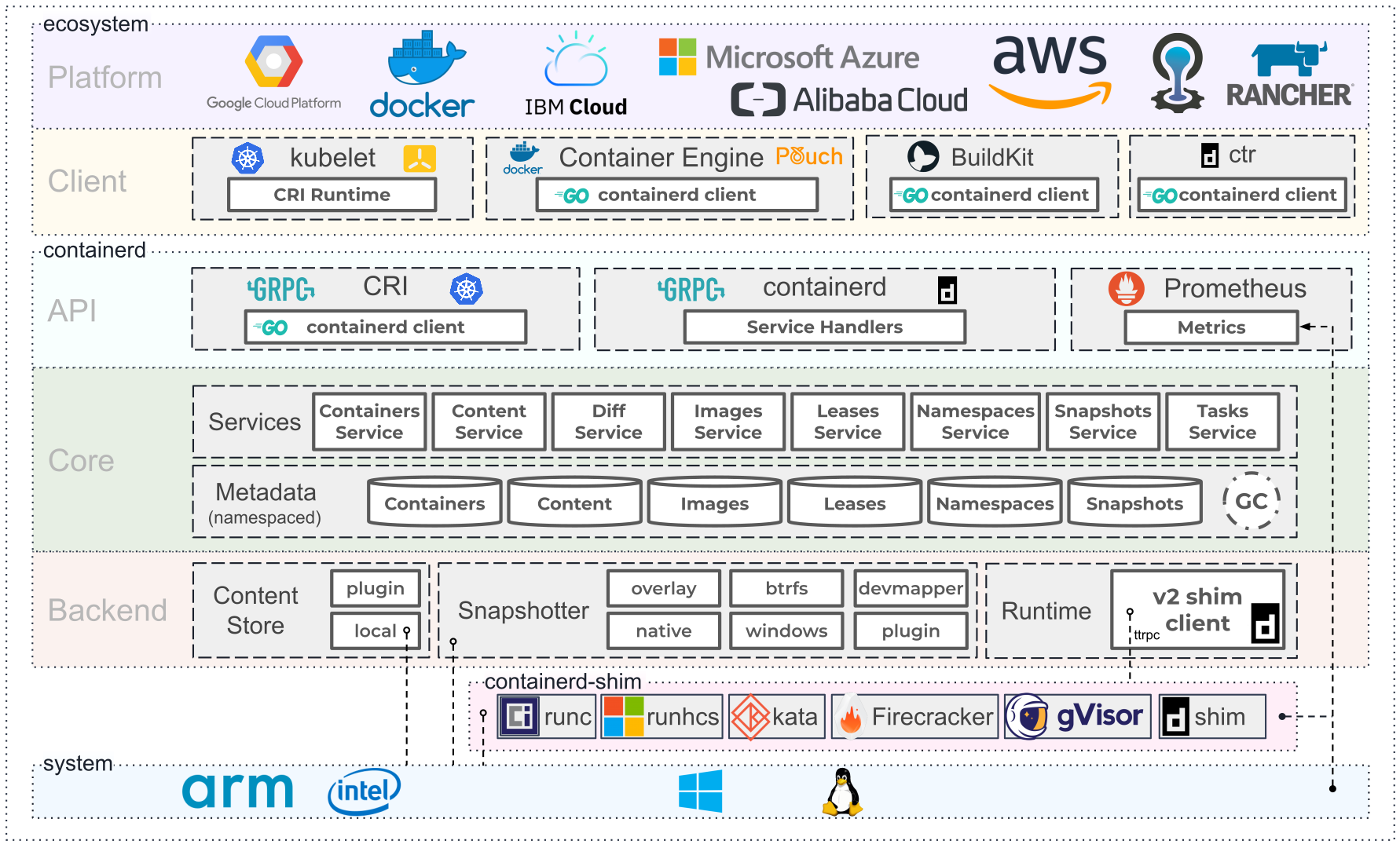